Wifredo Oscar de la Concepción Lam y Castilla was born December 8, 1902, in Sagua la Grande, Cuba. In 1916, his family moved to Havana, where he attended the Escuela de Bellas Artes. During the early 1920s, he exhibited at the Salón de la Asociación de Pintores y Escultores in Havana. In 1923, Lam moved to Madrid, where he studied at the studio of Fernando Alvarez de Sotomayor, the Director of the Museo del Prado (and a teacher of Salvador Dalí). In 1929, Lam married Eva Piriz, who died of tuberculosis two years later, as did their young son. This tragic event may have contributed to the dark and brooding appearance of much of Lam’s later work.

In the early 1930s, the effects of Surrealism were evident in Lam’s work, as was the influence of Henri Matisse and possibly Joaquín Torres-García. In 1936, a traveling exhibition of the work of Pablo Picasso shown in Barcelona, Bilbao, and Madrid proved inspirational to Lam both artistically and politically. He moved to Paris in 1938, where Picasso took him under his wing and encouraged his interest in African art and primitive masks. During that year, he also traveled to Mexico, where he stayed with Frida Kahlo and Diego Rivera. Lam’s own multicultural heritage (as the son of a Chinese father and a mother of mixed African, Indian, and European descent) and his involvement with Santería, a religion rooted in African culture, would soon become integral to his work. By the late 1930s, Lam was associated with the Surrealists. He had his first solo show at the Galerie Pierre Loeb in Paris in 1939, and his work was exhibited with Picasso’s at the Perls Galleries, New York.

During World War II, Lam spent most of his time in the Caribbean, along with Claude Lévi-Strauus, André Masson, and André Breton, whose poem “Fata Morgana” Lam illustrated in 1940. Lam eventually made his way back to Havana in 1941. His first year in Cuba marked a watershed in his artistic development; he was introduced to the theories of Carl Jung, and by the end of 1942 he had begun his powerful painting Jungle. Lam’s exploration of mythic images paralleled that of his contemporaries in New York, the Abstract Expressionists, though Lam used specific subject matter. Lam created his own style by fusing Surrealism and Cubism with the spirit and forms of the Caribbean.

Between 1942 and 1950, the artist exhibited regularly at the Pierre Matisse Gallery in New York. His second marriage, to Helena Holzer in 1944, ended in divorce in 1950. In 1946, after a four-month stay in Haiti, Lam returned to France via New York. In 1948, he met Asger Jorn, who was a friend for many years. He traveled extensively until 1952, then settled for three years in Paris before resuming his travels again in 1955. In 1960, Lam established a studio in Albisola Mare, on the Italian coast. The winter of that year he married Swedish painter Lou Laurin, with whom he would have three sons. In 1964, he received the Guggenheim International Award, and in 1966–67 there were multiple retrospectives of Lam’s work at the Kunsthalle Basel; the Kestner-Gesellschaft, Hannover; the Stedelijk Museum, Amsterdam; the Moderna Museet, Stockholm; and the Palais des Beaux-Arts, Brussels. Lam died September 11, 1982, in Paris. 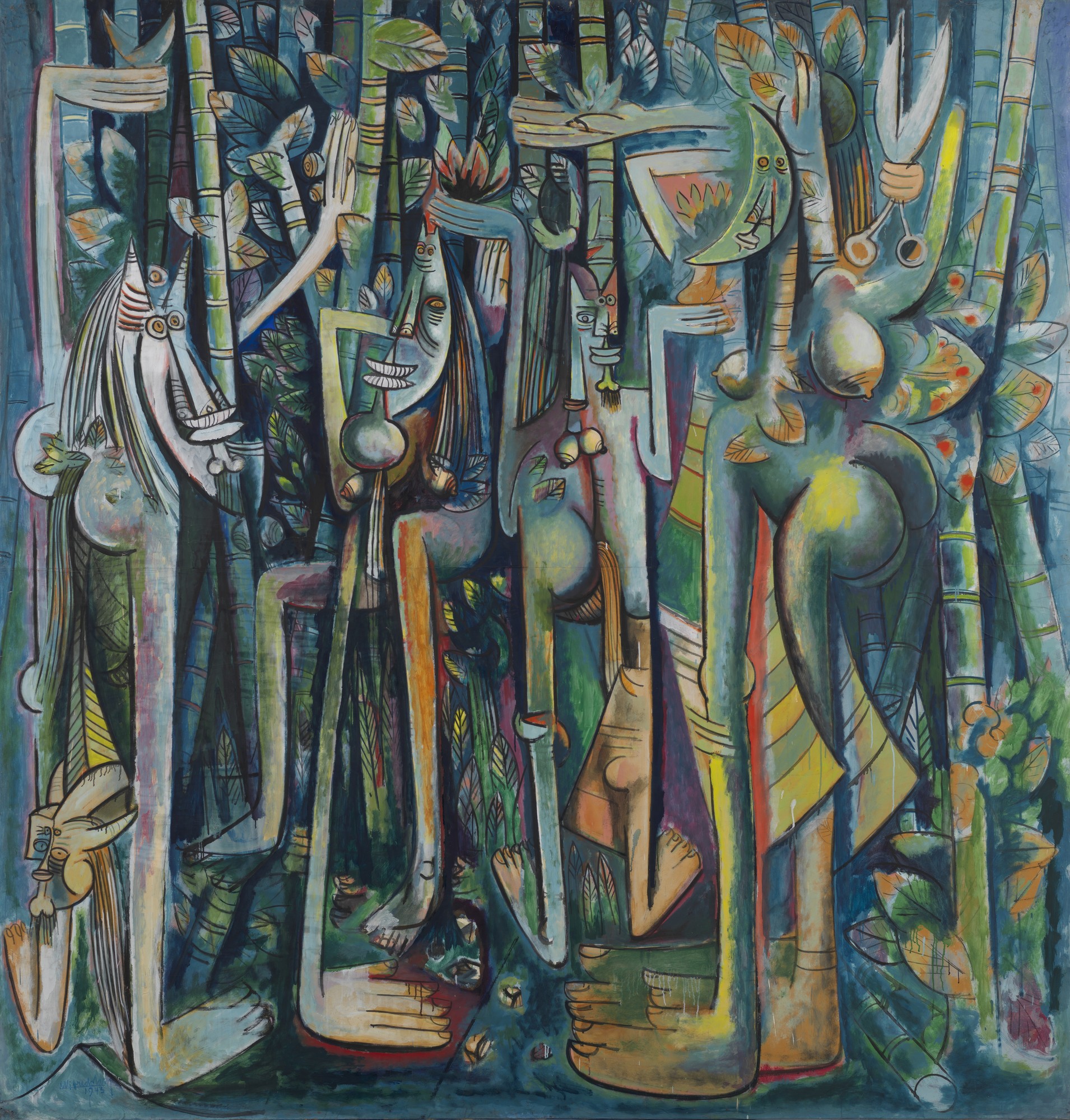