The Nottingham Contemporary, in October, 2012, presented a major exhibition of Haitian art, the UK’s first for many years. Nearly 200 paintings, sculptures and sequin flags by 35 artists from the 1940s to the present day trace the representation of Vodou, reflecting Haiti’s historical experience through the supernatural.

Haiti is especially known for the art of its urban and rural poor. The label “naive” has often been applied to it, but doesn’t do it justice. The imaginative power and visual intricacy of these artworks reflect the richness of Haitian history and culture. They are in sharp contrast to the country’s familiar reputation for extreme poverty, natural disaster and political violence.

Haitian art is often at its most extraordinary when inspired by Vodou – a spiritual belief system followed by an estimated 90% of Haitians. With its roots in West African religions, Vodou includes aspects of Catholicism (most of Vodou gods are linked to Catholic saints), Islam, European folklore and freemasonry, as well as the religion of the island’s Taino people, who were almost wiped out by the first Spanish settlers. This fusion reflects the history of a small nation at the centre of the Atlantic World.

Vodou’s host of spirits who interact with everyday life inform much of Haiti’s culture. The exhibition’s title, Kafou, means “crossroads” in the Haitian Creole language. Crossroads have great significance for Vodou, since they are the place where the world of the living and the world of the spirits meet. Kafou is himself one of the lwas, as the Vodou spirits are called.

Vodou is never simply escapist. Its gods came into being in Saint-Dominque, as Haiti was known under French rule, during slavery. Saint-Dominque was France’s richest colony. Its wealth was the consequence of a massive and brutal slave system – there were half a million slaves in Haiti by the late 18th century. Some of the Vodou lwa are connected to Haiti’s extraordinary revolution of 1791-1804, when slaves and former slaves eventually defeated the world’s most powerful army, led by Napoleon Bonaparte. This event sent shock waves around the world and inspired anti-colonial liberation struggles over the next two centuries. After the revolution Haiti was economically and politically isolated by the Western powers, which feared the spread of slave revolt. Its complex religion was misportrayed as black magic – propaganda that has influenced perceptions of Haiti to this day.

Haiti’s extraordinary history is evoked in its extraordinary art, often through Vodou symbolism. Many of Haiti’s most celebrated artists over successive generations are well represented in the exhibition.

View the exhibition photos from inside the Nottingham Contemporary Gallery. 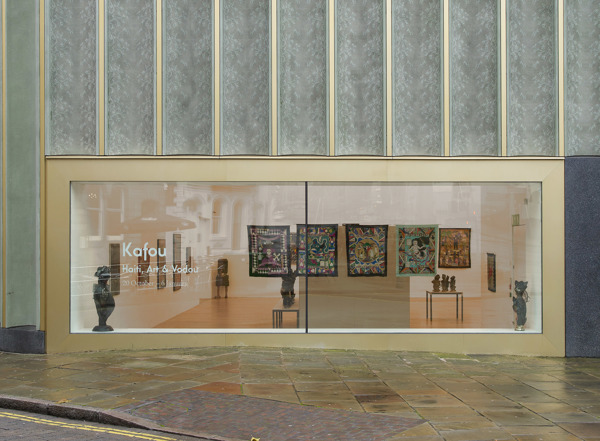